Firstly, we have been a one car family again which is not something I wanted to be typing. But yes, the car is back in the shop, and has been since it was towed to the dealership early Friday morning. Can't believe it? Neither can we, thus we have been car shopping for days because we are fed up to here with the uncertainty. Actually Bruce is very sad about this as he loves his car when it is working properly. Despite having just spent nearly a week in the shop, about sixty miles from home a warning came on---drivetrain malfunction. Needless to say, we were nervous about getting home with all of our gear on the car. Limping the last few miles we made it!! So that was the sad end of the trip.

Let's go back to the beginning because it was really all fun and games while we were at Ocean Pond Campground in the Osceola National Forest, just outside Lake City, FL, about 170 miles from home. 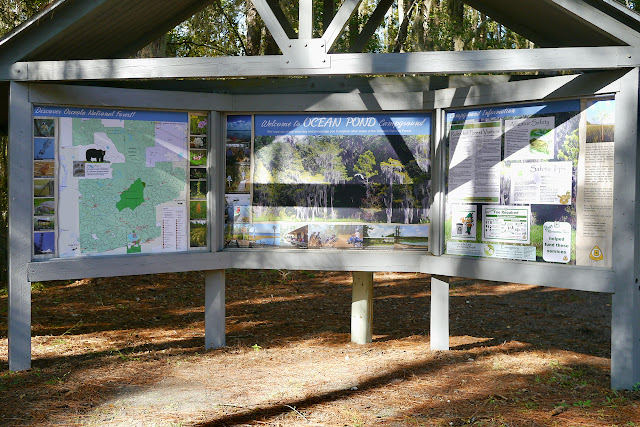 For the record, we saw no black bears; the only creature I saw was a little bunny just after sunrise one morning.

First we had to get there, taking our usual back roads, one of which was having some construction. The reason this fellow is sitting down is because it was blocked off for about two miles, so no hurry to wave traffic along! 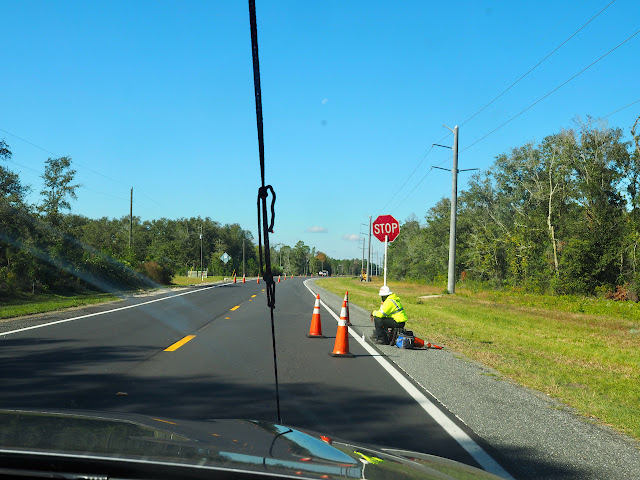 Eventually we were moving, turning onto the road leading into the forest. I can't get enough of this photo.. 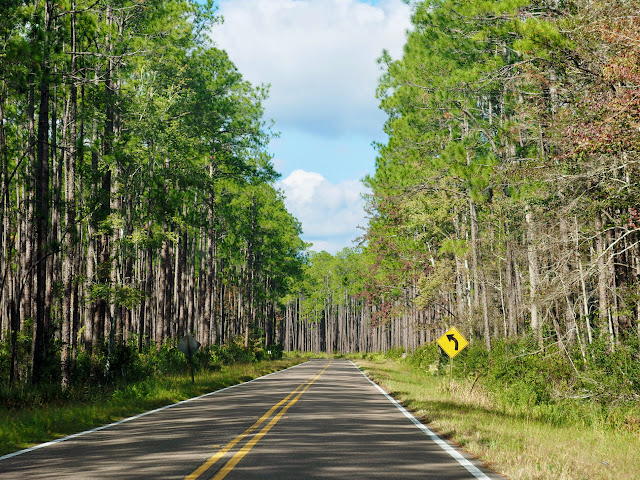 By now it was about one in the afternoon so we had a quick sandwich and then set up camp. 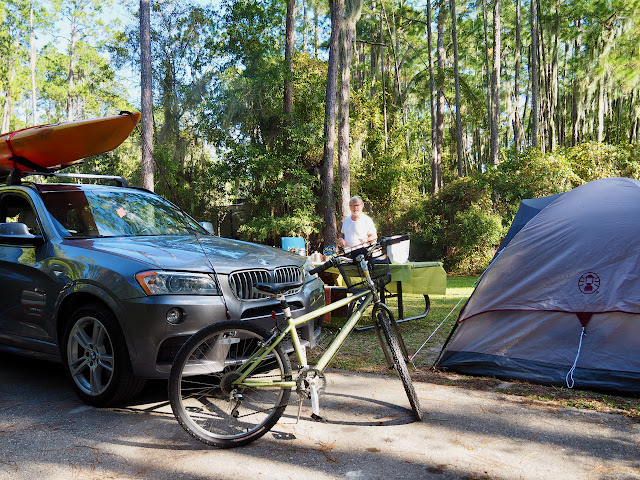 National forests do not take reservations-- you have to arrive and hope there is an empty spot! This particular campground is very popular so we were quite lucky to get this amazing spot on the water. Our new bike rack worked like a charm and I used it for both pleasure and work. Work? Oh yes, gathering firewood was my job. 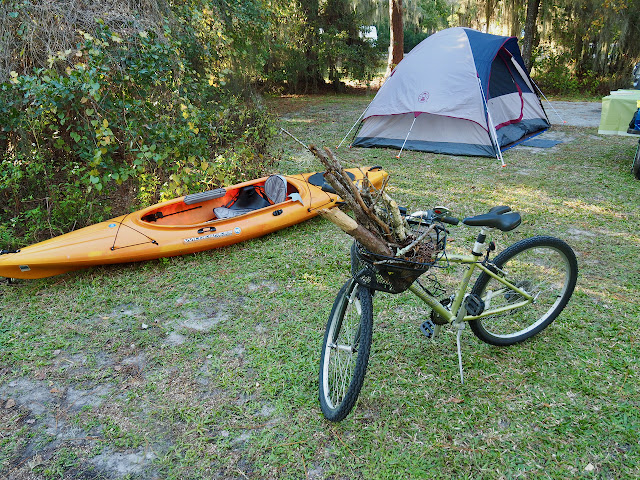 There were several areas, only one of which has electrical hookups, which we did not have. Mostly the RVs use them, although had there been an open one we could have camped amongst the big boys. 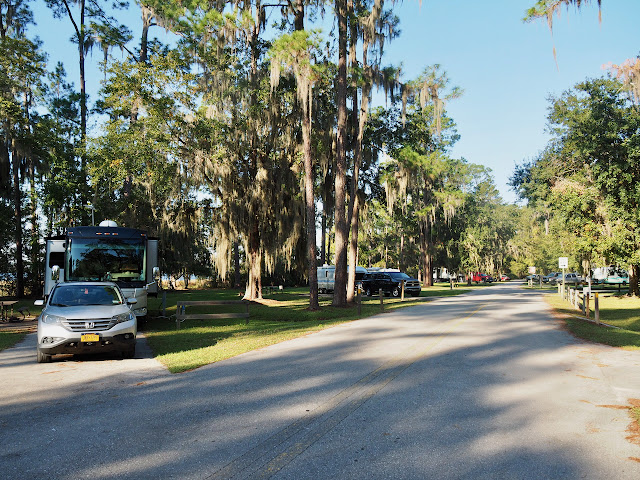 This area had the closest bathroom and shower area, so oftentimes I used my bicycle for that too. Should you be wondering, this is what one of the four showers looks like: 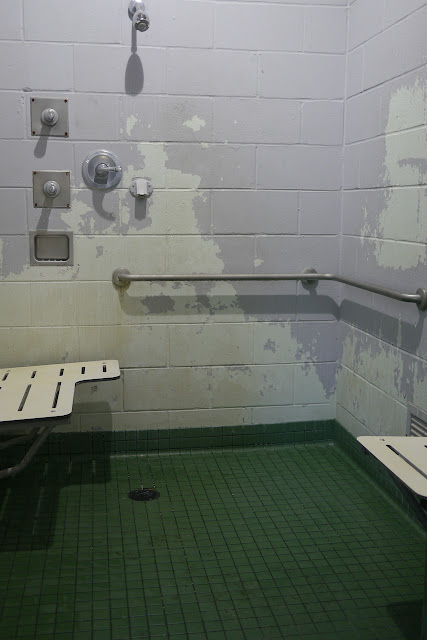 A bit of peeling paint, but good hot water and pressure, so no complaints from us. And let me tell you that hot water felt wonderful indeed because it was mighty chilly during our stay, mostly at night. How chilly, you wonder? 41 degrees our last night there! But we had a fire, this being the first one: 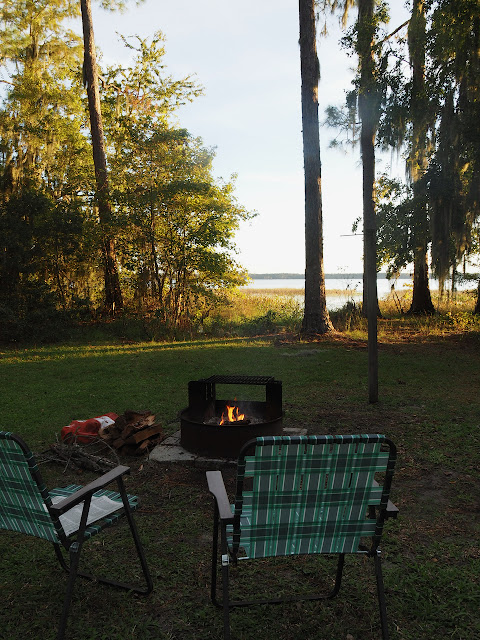 It is super fun cooking outdoors especially when you have all that you need. 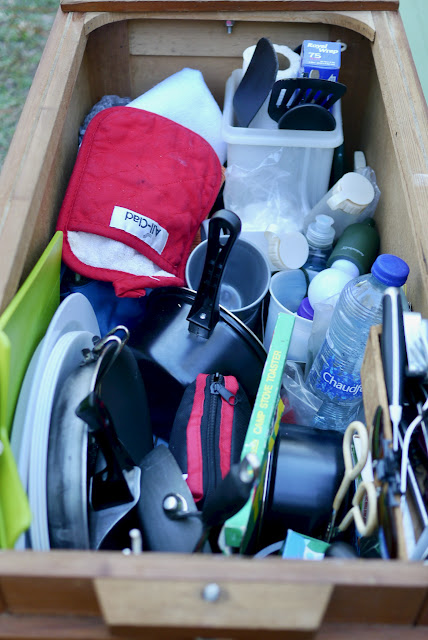 Now you know just what was in the camping box! Or maybe you don't because you did not see my last post?I mentioned that I gathered firewood, leaving other chores for Bruce, including washing the dishes. One thing was that it got dark very early so making dinner had to begin just after 5 in the evening, leaving enough time to wash up in dim light. 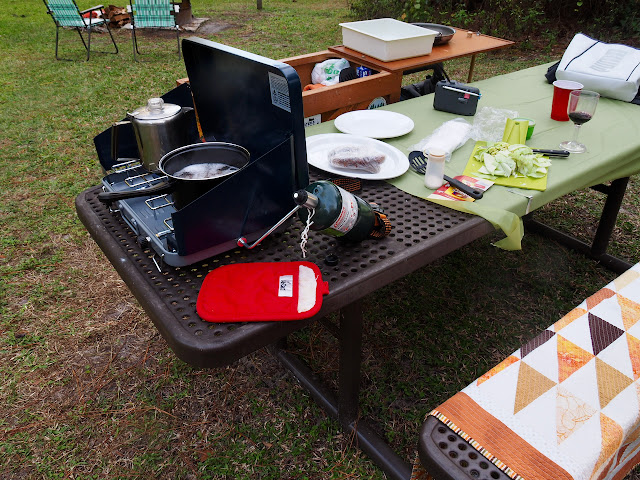 I am boiling potatoes here before combining the cabbage and bratsworth in another skillet. Another item in the camping box is a folding saw which Bruce used for some of the wood I gathered. 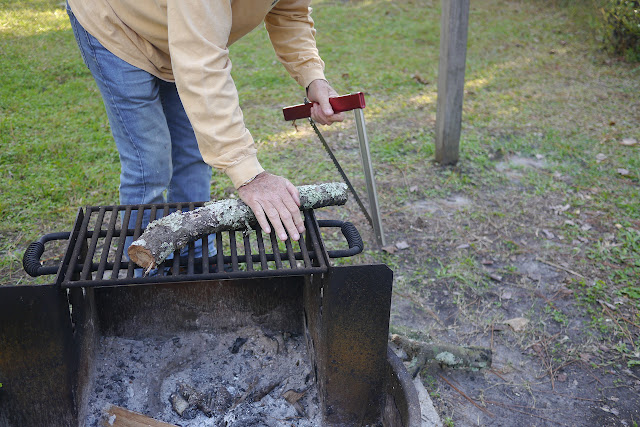 I mentioned it was chilly, right? The fire was heavenly, especially combined with the glitter of a star filled sky above. 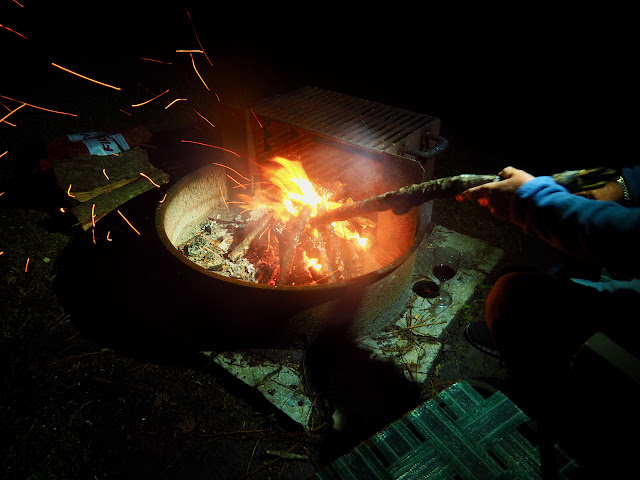 Before it got totally dark that first night, well cooking and sunset watching is a tricky business, but I managed, becoming totally obsessed with the Cypress tree. 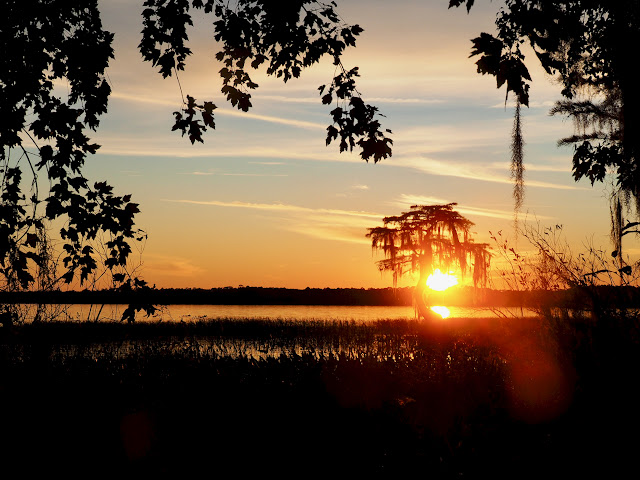 Rising early the next morning, another spectacular show on the lake at sunrise. 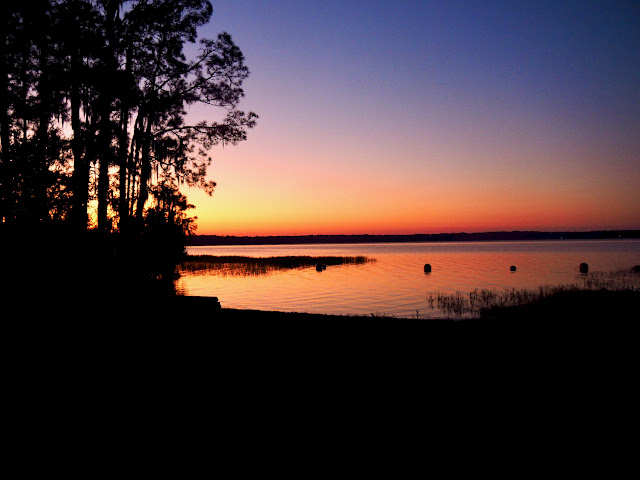 Could it have been any better? I don't think so.

Camping is mostly a leisurely business, especially if you are staying for a few days. One morning Bruce took off in the kayak while I read by the morning fire. Another day he spent mostly reading the novel, The Great Alone, thoroughly enjoying it. 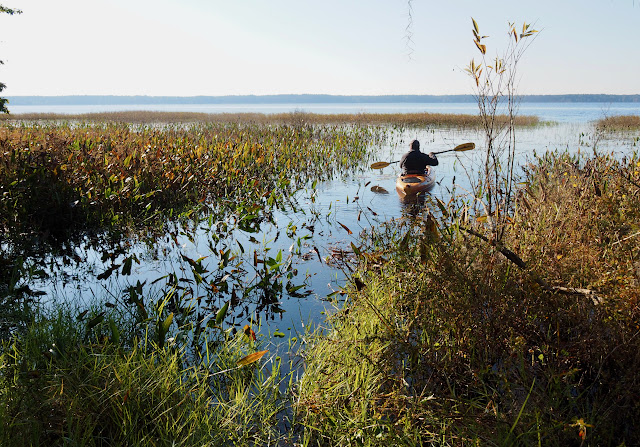 Folks walk by, greeting one another and making friends. If you can imagine, and really I still cannot, a man came to our huge site, 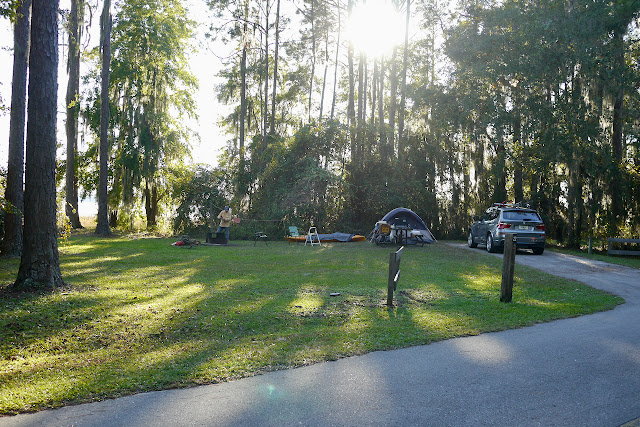 wondering when we would be leaving because he wanted our space. We got to talking and he mentioned he was from Western Kentucky. Hmmm....know anyone in Fancy Farm? Yes he did. Not only in FF, but he knew folks in Paducah, specifically....our second cousin Hilary!!! Perhaps you remember when we took the trip to meet him and his lovely wife Ginnie? Should you be curious, click on this link!Unreal, both how big our site was, and meeting that man who claimed Dr. Hunt (cousin), as he is locally known, was the best orthopedic surgeon around. There were families with young children and plenty of old folks like us who spend their time traveling all over, heading to Florida for the winter months. Thus, it is hard for Floridians to find open camping sites!

Also there are hosts, volunteers who park their RV's for up to six months who clean bathrooms and sort out any problems in exchange for their spots which include water and electricity. Bruce began a conversation with one of the women hosts and told her I was a bird nut. She promptly drove her golf cart to our space, showing me photos of a newly hatched Red-cockaded Woodpecker that a biologist was banding. An endangered species, the forest is a habitat and scientists come from all over to study them. Of all things, we'd taken a walk on the Florida Trail the day before, 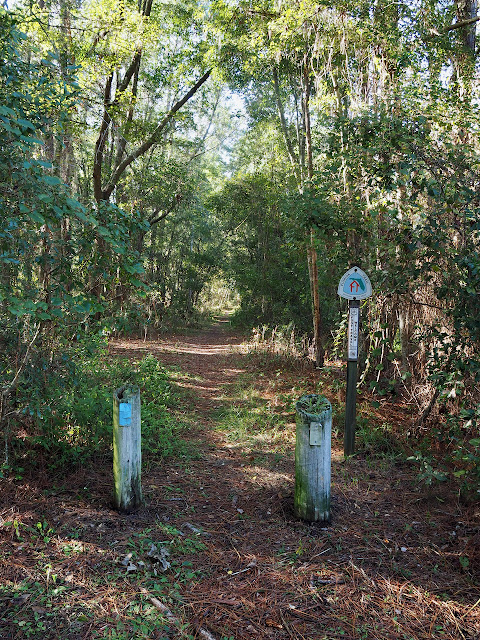 and just when we got to this spot, 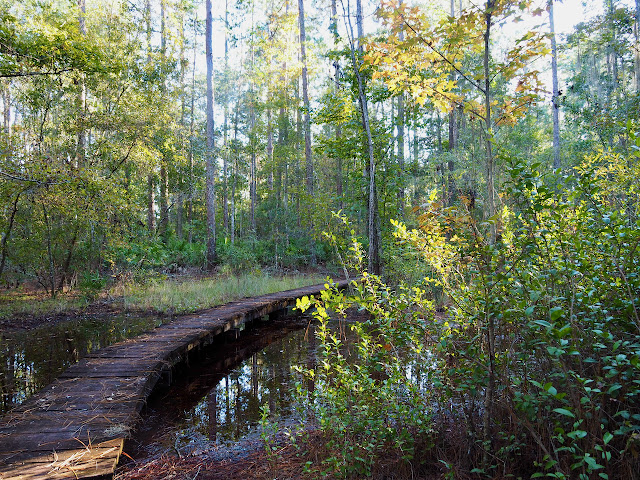 I saw two woodpeckers that I'm almost certain were that kind. Two quick for my camera though! There was plenty of standing water the further we went, prompting us to turn around to retrace our steps. There were some lovely Maple trees with color, 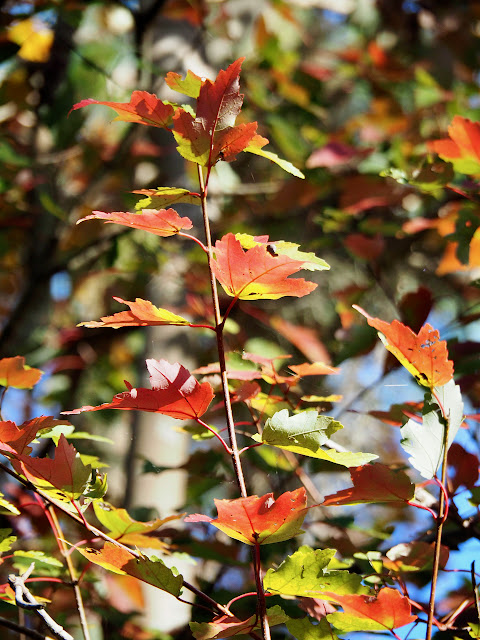 but not nearly as many birds as I'd hoped for. In exchange I had a multitude of STARS which I really can't get enough of. I'm not going to lie, the first night we were cold with Bruce thinking it would be too much for me. Not so! After spending nearly eight months sweating I was more than happy to put on another pair of socks along with long underwear, and our Icelandic blanket over two quilts. Before packing the tent to go home, here's the bundle of covers we used. 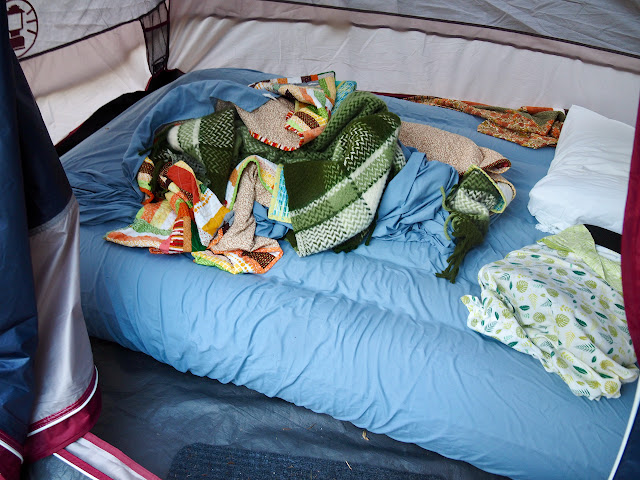 Popping Jiffy Pop over a campfire ended up like this... 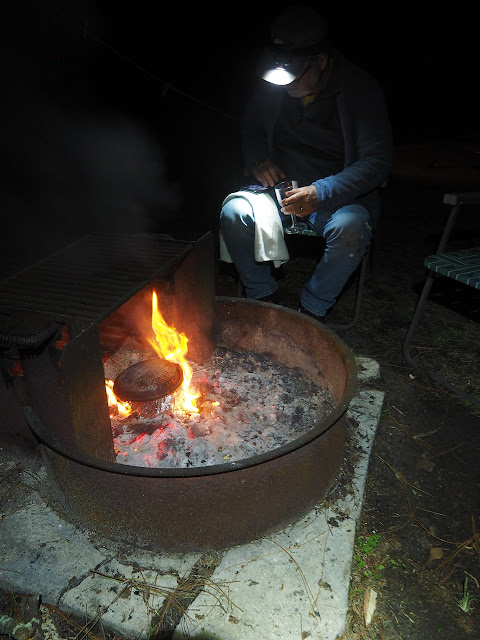 That's right, up in flames! Bruce is wearing one of our handy head lamps because believe you me, it is very dark at night! The lake is surrounded by trees with almost no development so it is also quiet, aside from a little drone of traffic from nearby I-10. One day I was worried when I saw the smoke, however, it turns out it was from a controlled burn. 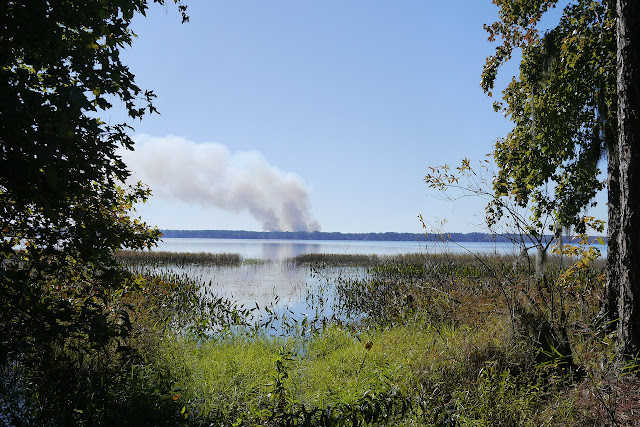 Here I am learning to light the stove before preparing yet another yummy outdoor meal. 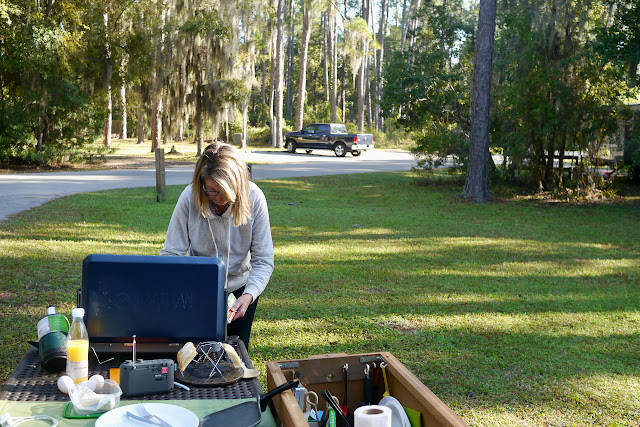 Look closely and you will see the toaster we used for the first time, and it worked beautifully.

I told you I was obsessed with the Cypress tree, taken on our last night. 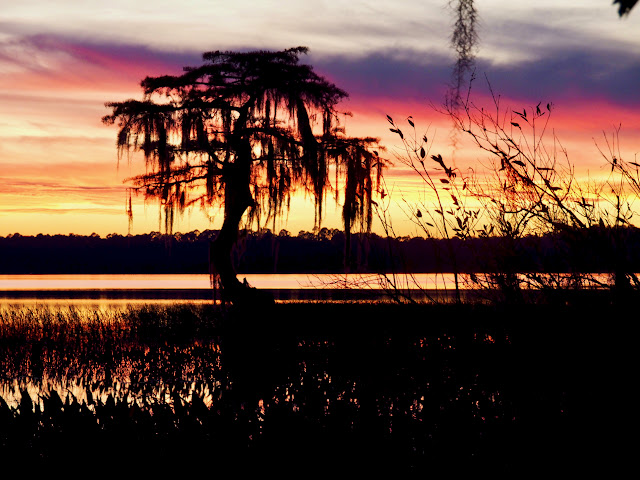 Because we were so close, we drove over to Live Oak, FL for a quick visit with Bruce's old friend Bill who recently bought a house on five acres there. The big oak on the right is what sealed the deal for them. 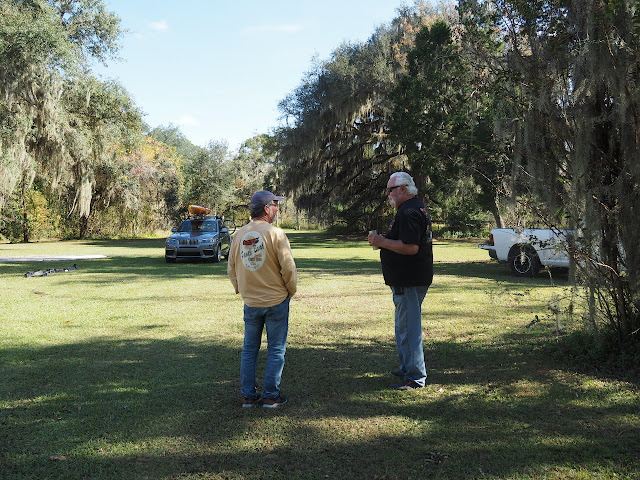 The good news is that we took the Interstate on the drive home, hoping to arrive before dark. Making a stop for a sandwich about 60 miles from home, Bruce asked me if I noticed the car skipping? No, not really. Off we went and fortunately that pesky warning light waited until we were much closer to home. Once there, I threw everything in the bottom of the shower to wash the following day, just in case we were bringing bugs home, although we saw very few during our time in the forest. We traded cold weather for no bugs! 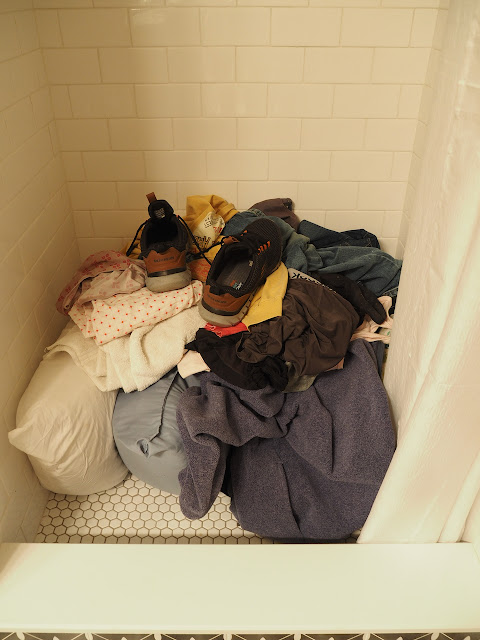 How do I like camping so far? A lot! It will be even more fun once we have a reliable car, something I thought I would never write about at our age. In the grand scheme of things, it is a small problem to have.

Three days of car shopping behind us, we await the news on the car so we can trade it in ASAP!

My Almost Endless Quest for an Accessible-ish and (Somewhat) Charming Home
February 01, 2023