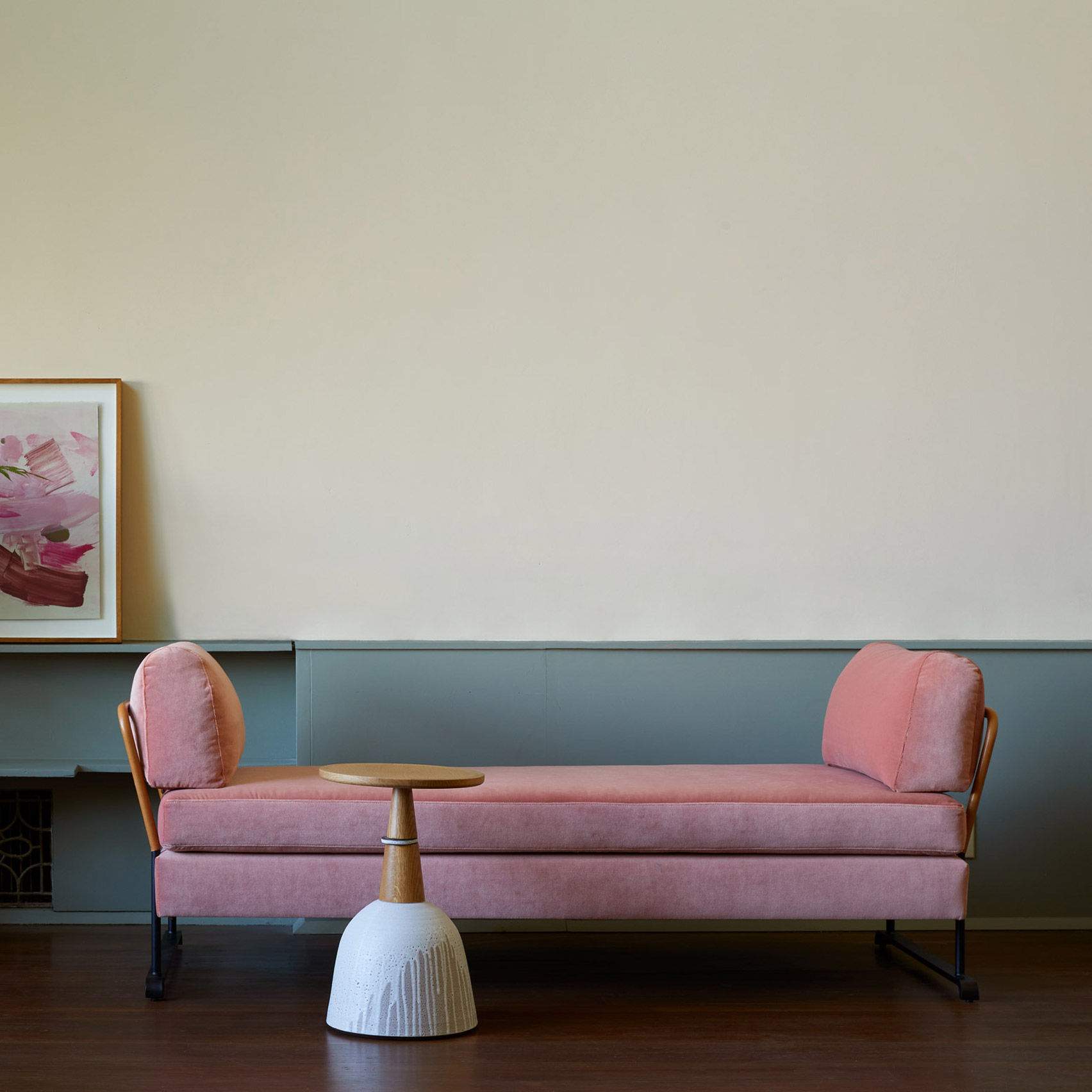 Lawson-Fenning, which was founded by Glenn Lawson and Grant Fenning, designed the furnishings to geometric forms and a mix of materials similar to those used by the modernist California designers such as Schindler and Richard Neutra.

The furnishings are a mixture of the studio's recent Maker's Collection comprising a lounge chair, bookcase, console, book rack, pinboard, armchair and daybed alongside older collections.

The studio chose to mark the launch of Maker's Collection with a photoshoot in RM Schindler's Manola Court, a grouping of apartment buildings that the Austrian-born American architect completed in the 1930s.

"By featuring the collection within the same walls that inspired the design, we aimed to bring life to the pieces," said Lawson-Fenning founders Grant Fenning and Glenn Lawson.

Fenning-Lawson designed the Maker's Collection to expose their structure and construction, which was a key detail in mid-century design.

"The Maker's Collection honors that vision with exposed hardware, structural steel frames, and materials in their purest form," it said. "Geometry and intersecting planes are central to the vernacular of the design."

For the daybed, the team upholstered a rectangular cushion with pink velvet. The seat features powder-coated steel arms that are wrapped in leather.

A leather slingback detailed with brass buckles and buttons attaches to the oiled wood frame of both the Maker's Lounge Chair and Maker's Armchair. Both seats can be customised with either an oiled walnut or oiled oak frame and a number of fabrics.

To form the arms of the Armchair, Lawson-Fenning placed upholstered pads on top of curved black metal rods.

Both the Maker's Console and Maker's Bookcase are constructed with American oak or walnut and feature several shelves. The backs are detailed with a sheet of blackened steel perforated with tiny holes. The unit rest bases also made from the black metal material.

Other pieces in the new series are two pinboards available in natural or black cork,s and a bookshelf with three container-like shelves made from wood that attach to a metal back.

The furniture was displayed alongside a round coffee table, floor mirror, and other objects from Lawson-Fenning's Winter 2019 Ojai Collection, which was also influenced by Schindler's work and the topography and lifestyle of the California coast.

A surprisingly stylish convention hotel: My stay at the Hyatt Regency Orlando
January 25, 2023